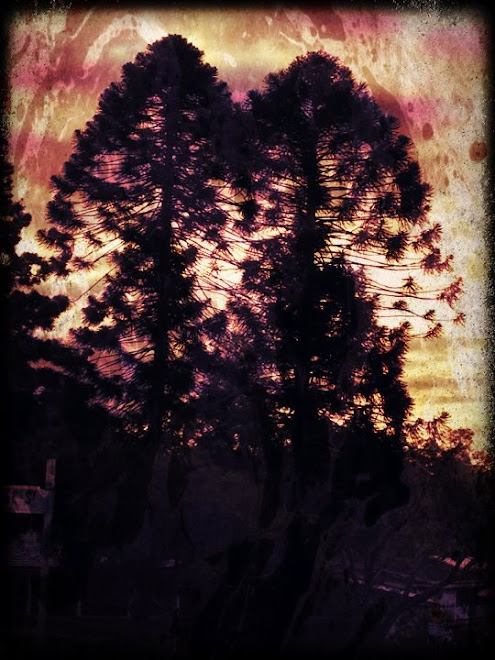 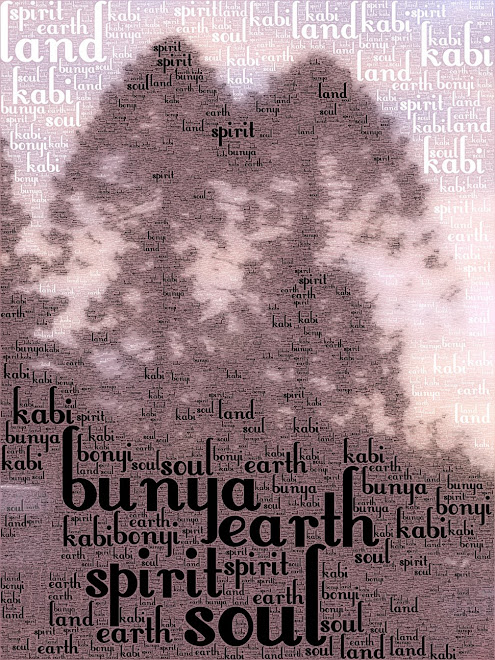 One of my latest artworks 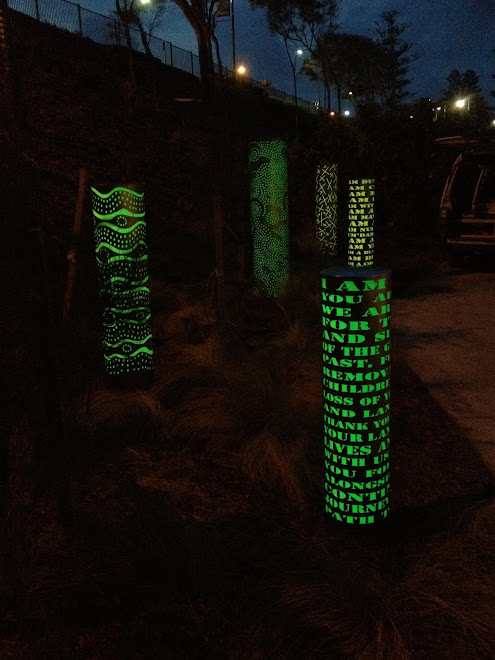 Image of my Storypole by night - the colours slowly change colour 1 pole at a time. 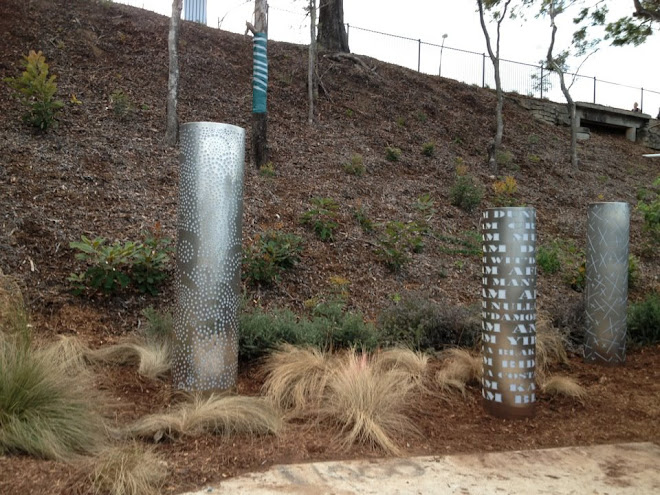 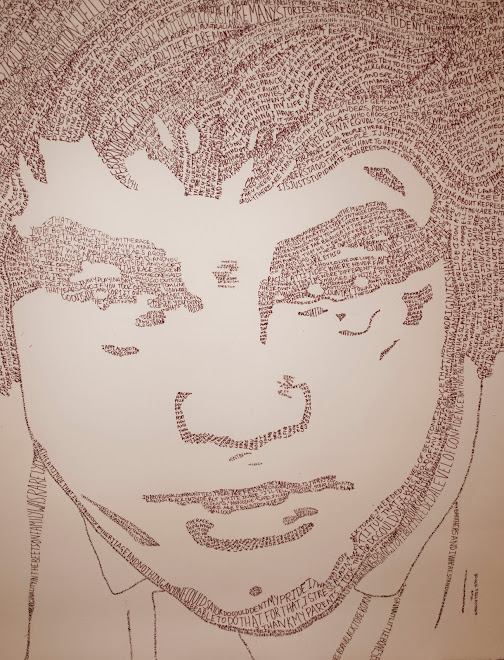 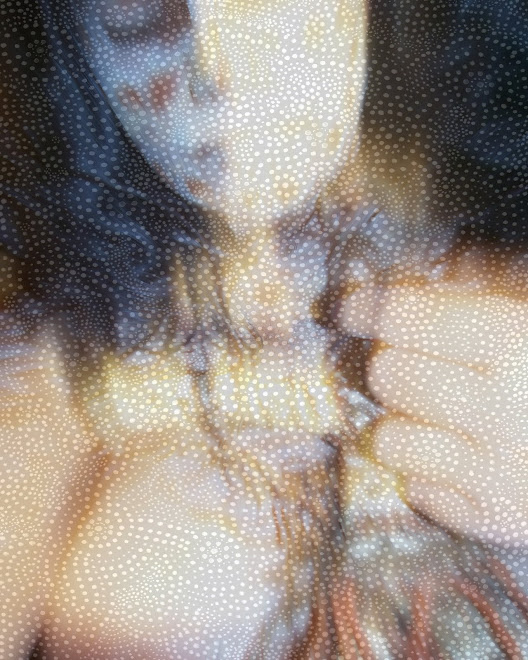 this is my entry for last years Telstra Awards new media category. 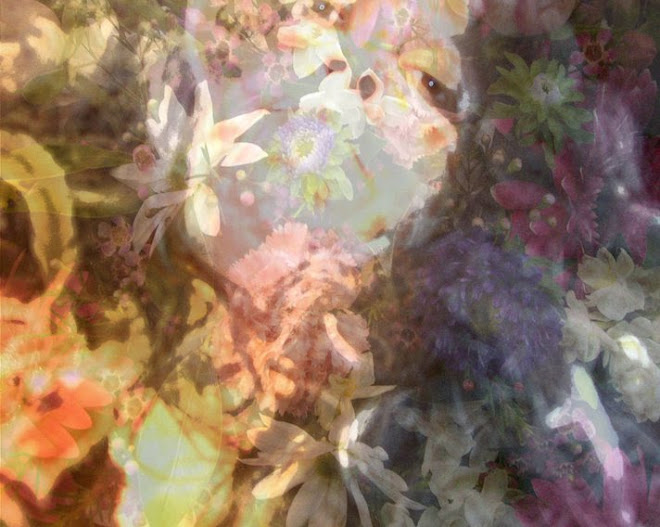 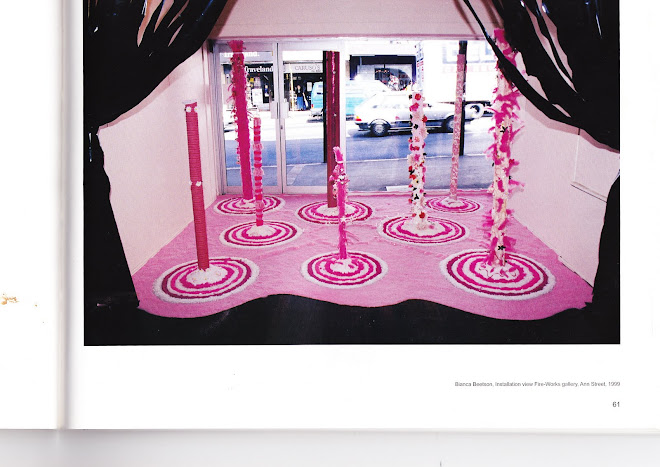 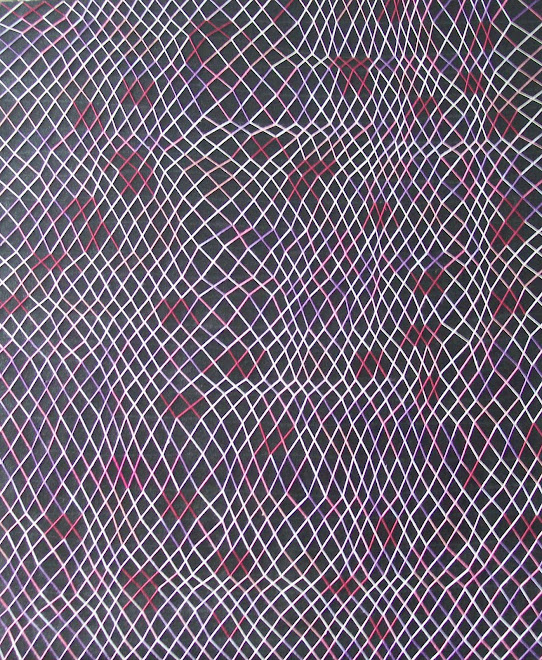 Bianca Beetson is a Kabi Kabi (Sunshine Coast) woman, Born in Roma Western Qld. Studied a Bachelor of Arts Visual arts at the Qld University of Technology from 1993 -95 and Completed her Honors degree at the same Uni in 1998.
Bianca’s work is always pink, with the occasional variation of Hue or Medium, which consequently this has become her signature for her work. It is not just the colour pink alone that makes her work so unique, but rather her use of Humor and satire to critique issues of importance to her. Bianca draws her inspiration from real life experience. Often many of her ideas being triggered by conversations she has with people. Additionally Bianca says many of her best ideas have come to her in dreams and whilst performing mundane activities such as vacuuming, although Bianca believes, she can’t underestimate the power of Television and popular culture to bring ideas to fruition.
Bianca’s work is concerned with her individual identity as an indigenous Australian, as well as the identity of Australia as a nation in terms of its history and its concept of itself. Bianca’s work is loaded with layers of meaning and numerous reference points. That is the commodification of Aboriginal Culture; the demarcation of Art, artifact and Kitsch; critique of the social structure; and the critique of the feminine. Reflected through the eclectic structure of the work, and the apparent reference to the desert dot paintings of the central Australian desert artists, and the stenciling technique of the Arnhem Land cave painters, blended with references to the work of twentieth century artists such as Emily Kame Kngwarreye, Lin Onus, Rover Thomas and Andy Warhol
Through the embellishment of the surface of the work, Bianca expresses through candy pinks, fake fur and manmade frills the notion of artificiality. The work becomes seriously satirical, and combines a dizzying array of popular cultural references, Rock Diva’s, Hollywood Stars, Mass media. The work falls between Painting & Sculpture, the performative and the static, the real and the fake; the finish is garish, slightly deranged, but always intense and alluring, a tension which functions as a metaphor for the work as a whole. A combination of elements are used within the work to suggest the interconnectedness of cultures, markets and the media. The work demands a constant process of the reinvention of self & place, as there is a cultural ambiguity surrounding the symbols used. The symbols function as vehicles for understanding the world, for reconstructing the ways in which cultures overlap, traditions are translated and meaning is recreated.
Furthermore the utilization of Humor in the work Bianca sees as being a necessary tools for survival and self determination, the ability to laugh at ourselves, and to laugh at the times we find ourselves in, A spoonful of sugar makes the metaphor go down, an Ironic sensibility, and overall sense of the ridiculous and the absurd.
In 1997 Bianca was selected for the Primavera exhibition at the MCA in Sydney. She had work in “Black Humor and “Saltwater, freshwater, Borewater and “transvisual” national touring exhibitions. In April 1997 Bianca won her first art award; The Anglican Church Grammar school Old Boys Association Encouragement award for artists under 25. As a member of the Campfire Group – Aboriginal artist’s co-operation, she has had the opportunity to be involved in many projects based on cultural collaboration. Including “All Stock Must Go which was a part of the 2nd Asia Pacific Triennial at the Queensland Art Gallery in 1996-97. Bianca has had a number of solo exhibitions in regional Qld and Brsibane, and her work has been included in numerous group exhibitions through out Australia and Overseas. Bianca’s work has been included is a number of festival such as the Livid Festival, Stage X, and Dar. Recently Bianca Received an Arts Qld Grant to produce and Exhibit a Body of Work in the 2002 Adelaide Fringe Festival. Also recently Bianca was commissioned by Leah Purcell & QPAT to create an art work for the “Black Chic’s Talking” project. Bianca currently has a solo exhibition touring around Qld titled “The other Arty Beetson. And is a member of the prestigious ProppaNOW artist collective. Bianca has work in public and Private collections around Australian and Overseas including Art Bank, QPAT and Qld Art Gallery.
Posted by pinkstinks at 4:05 AM 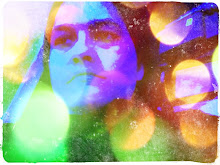 Yet another new self portrait 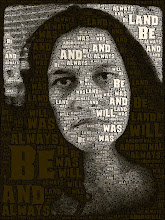 This is another of my new self portraits

Detail of artwork for Chasing the Lollyman 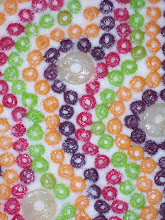 This is a detail of the artwork I created for the set design for chasing the Lollyman, made from lollies & fruit loops. 2010

Find more of work on these links 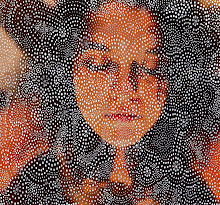 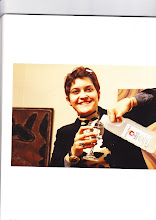 an early photo of me when I was a apart of the Campfire Group, this photoshoot was a part of the Fish & Chips Installation which was included in the Black Humor exhibtion in 1997.

I am not Sorry 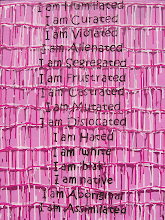 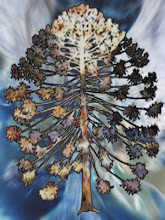 An act of protection 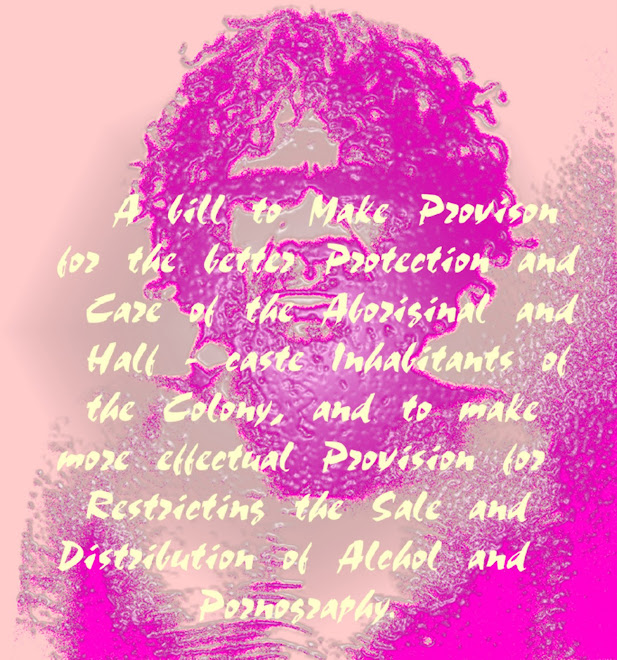 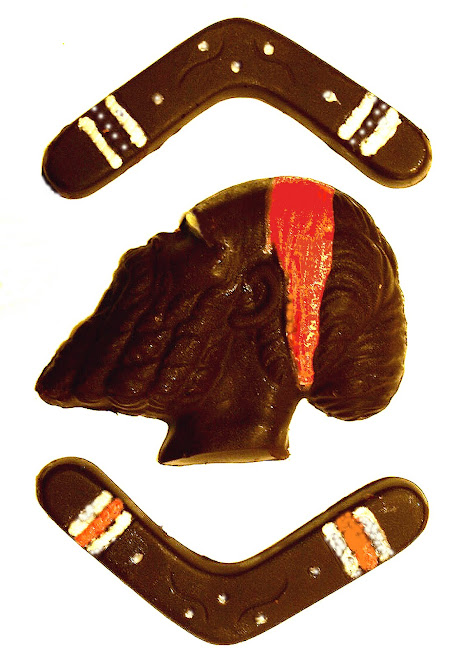